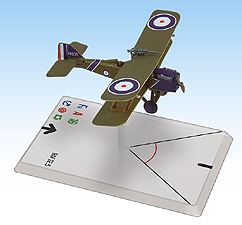 The RAF SE.5 fighter (quickly becoming the SE.5a) was one of the aircraft that turned the air war around for the Allies. Both fast and manoeuvrable, it was easy to fly and an excellent gun platform, as demonstrated by the many aces who scored most of their victories in the airplane. Though engine problems inhibited it early success, once they were solved, it became one of the best fighters of the entire War, able to match or beat anything the Germans flew. Over 5000 were produced.

RAF SE.5 (BISHOP)
Canadian ace "Billy" Bishop was one of the top scoring pilots of the war (72 victories), and special cards are included that especially capture his shooting skills.

Each WW1 Wings of Glory Aeroplane Pack is a ready-to-play model, painted and assembled, 100% compatible with any other WW1 Wings of Glory game product. In each pack you will find all you need to play with the aeroplane: a special base with gaming stats, a variable altitude flying stand, and a specific deck of cards.

This is not a complete game. You must own a WW1 Wings of Glory - Rules and Accessories Pack or a Duel Pack to play.