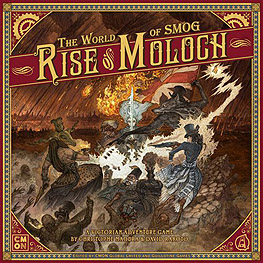 The World of SMOG: Rise of Moloch

London, 1888
Obscured by dark smoke, the industrial capital of the British Empire stands as the pinnacle of progress. Obsessed with Ancient Egypt, archaeologists have discovered the means to reanimate dead bodies, quickly replacing mechanical inventions with cheap, undead labour. However, a secret society within the city wants more. They plan to install a government of the dead, lead by an ancient god forgotten by men: Moloch.

Only one thing stands in their way: The Gentlemen of the Unicorn Club. Her Majesty counts on them to thwart The Cult!

RISE OF MOLOCH is a Victorian adventure board game for 2 to 5 players that takes place in an alternate England where magic and technology have taken an extraordinary turn.

While one player acts as the Nemesis and takes control of secret society called The Cult, other players embody Gentlemen dedicated to thwarting the conspiracies that threaten the Crown, stopping the Nemesis by any means necessary.

The game comes with 6 different chapters that can be played as individual scenarios or as a campaign that tells the overarching story of Moloch.