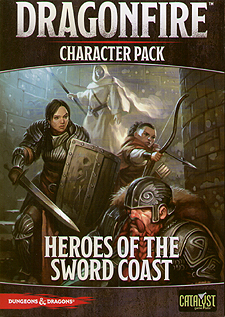 A warlock forges and otherworldly patron pact, and ancient magic surges.
A Ranger relentlessly stalks prey through the wilds, bow in hand.
A bard's haunting song fortifies and emboldens companions.
A sword of fire bursts into existence in a druid's hand.

contains thirty-two additional Character screens, introducing the Druid, Bard, Ranger, and Warlock Classes into Dungeons & Dragons Dragonfire. Additional races are also features including Rock Gnome, Tiefling, Lightfoot Halfling, and Gold Dwarf. Other screens bring Classes, genders, and races together in a broad variety to fill out a sweeping range of adventuring parties. Finally, the pack includes dozens of sticker sheets, as well as twenty-seven new Market cards.
Review Game There is no review for this game at the moment why not be the first to review it.