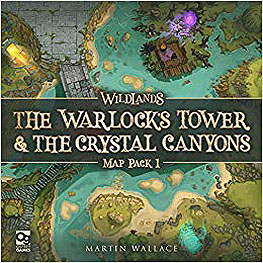 Wildlands: Map Pack 1 - The Warlock's Tower and the Crystal Canyons

IN THE WILDLANDS, OPPORTUNITY AWAITS... IF YOU FIGHT FOR IT.

Stirred by the shattering of the arcane crystals, an ancient warlock's tower has risen from the depths in which it was long hidden. The magical energies that were released here have reactivated ancient portals, and the lure of further secrets draws groups from far and near.

The mines in which the first arcane crystals were found, known to many as the Crystal Canyons, have also seen renewed interest from adventurers and explorers. Could there still be crystals that have retained their magical power somewhere deep within the mines?

THIS MAP ADDS A NEW DOUBLE-SIDED BOARD TO THE GAME, FEATURING MAGIC PORTALS, A MYSTERIOUS TOWER, AND DEEP CANYONS TO TRAVERSE.

Requires a copy of Wildlands to play.