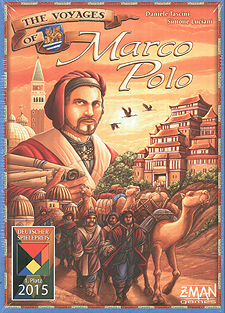 The Voyages of Marco Polo

It is the end of the 13th century, and the merchants Niccolo and Matteo Polo are setting off on their second voyage to the East. Joining them is Niccolo's young son, Marco. The voyage is being performed on the behest of the great sovereign Kublai Khan, who wishes to know more about Christianity. The three Polos travel far and wide - on land, at sea, through deserts and mountains, by camel and by elephant - in short, they experience the most exciting trails and passages of their time. Almost 25 years pass before Marco Polo sees Venice again. His reports of these wondrous journeys are among the most famous adventures in the history of the world.

In Marco Polo, players embody one of the many people who worked with and around Marco Polo during his travels. They start in Venice, but the choices each player makes will affect the journey upon which they embark. These decisions must be carefully considered... Will you go directly to Beijing? or would you prefer to follow the lavish route across Sumatra?

In addition to these strategic options - which change from game to game - players must also consider which contracts are worthwhile, as well as where and when other players are likely to get in their way.

Whether you play as the monk William of Rubruck, as a merchant from Iabriz, or even Kublai Khan himself, the game is always exciting and challenging. Who will you be this time?