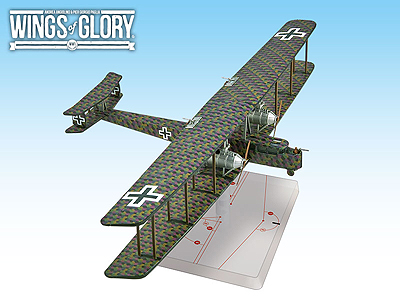 During World War I, aviation technology was incredibly fast, from the earliest combat machines to the development of massive weapons of destruction, veritable "Giants of the Sky," used to bomb the enemy forces and launch assaults deep into their homeland.

In the hangars of the famous Zeppelin airplane factory, the Germans engineered their multi-engine bombers, with features never seen before - enclosed cockpits, multiple engine nacelles, and a full array of machine guns to defend against the enemy fighters. The first mass-produced version to fly over the battlefield was the impressive Zeppelin-Staaken R.VI, with a wingspan rivalling that of a WW2 Superfortress. Flying at night with a deadly bomb load up to 4400 pounds, R.VIs were used in bombing raids as far away as Great Britain, bringing destruction and terror to London until the late spring of 1918.

This WWI Wings of Glory Special Pack includes a ready-to-play model, painted and assembled, to use together with any other WWI Wings of Glory game product. The box includes all you need to play with the airplane: a special base with gaming stats, a variable altitude flying stand, airplane card, management card, a deck of manoeuvre cards, rules, counters, and a double-sided 68x98cm poster map of London to use in your scenarios.