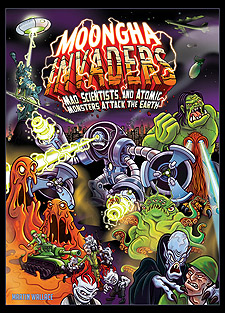 It started like any other day, people going about their business hardly noticing their fellow citizens, or what's going on beneath their feet. Deep underground mad scientists are raising monsters from the planet Moongha. Once fully formed they will emerge to spread terror and destruction. Cities will be laid waste to, and the human race will be hunted to extinction.

'Moongha Invaders' is a fun-packed monster game for three to four players. Each player takes the role of a mad scientist, secretly working on a variety of monstrous creations. The scientist who can inflict the most damage and destruction on the planet will be declared the winner. You can stomp Tokyo with the giant robot Mechoor, or spread through the sewers of L.A., with the Bloob. However, humanity is not defenseless, all your plans could come to grief if a hero appears to save the day.

The game is brought to life with magnificent plastic playing pieces representing the various creatures, heroes, army units, and rubble. This is the Kickstarter version of Moongha Invaders, which means it is a limited edition (only 4000 will ever be printed) and contains a two-player game using some of the same components. This second game sees a team of heroes attempt to save the city from an attack of terrible monsters.