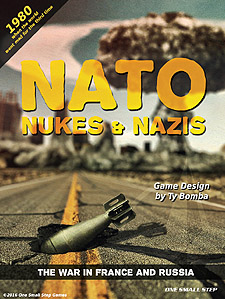 In the alternative history of NATO, NUKES & NAZIS, after the successful assassination of Hitler early in 1943, the Germans went over to a fully rationalized defence at the strategic operational and tactical levels.

Long story short: the Third Reich survived WW2 in truncated form. The new rulers of Berlin soon thereafter set in place their own "Warsaw Pact," an alliance among Germany, the Baltic republics, Belarus, Ukraine and the Balkan counties north of Greece.

The Allies reacted by creating NATO, which rump-Russia eagerly joined. By 1980, the same kind of rot that afflicted the USSR in our timeline began to set in within the Third Reich. Here, though, instead of initiating a German version of Perestroika and Glasnost, those ruling in Berlin decided to roll the dice on one all-out and final war for global domination. This game presents the two main theatres in that war.