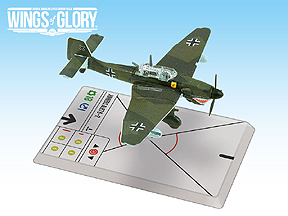 The Junkers JU.87 B-2, best known as "Stuka," was a single engine German dive bomber, easily recognizable by its inverted gull wings and fixed undercarriage. The Stuka's design included several innovative features, including automatic pull-up dive brakes and a famous siren, the Jericho-Trompete, which would unleash a morale crushing whine when diving. The Stuka was widely used with great success during the first period of the battle of Britain, although it late showed its vulnerability against well-organised opposition.

Sturzkampfgeschwader 77
StG 77 spearheaded the German Blitzkrieg in Poland and France, but suffered heavy losses of men and machines during the earliest part of the Battle of Britain, when it was used to raid on enemy shipping and islands.

This WWII Wings of Glory" Squadron Pack includes one ready-to-play model, painted and assembled, a decal sheet to customize your model as one of the the airplanes from a famous squadron, and everything you need to play (special base with gaming stats, altitude-stands, and a deck of airplane, skill and manoeuvre cards) with the model.

This is not a complete game. You must own a WWII Wings of Glory - Rules and Accessories Pack or a Starter Set to play.