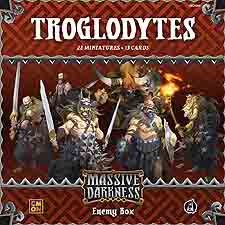 Was £28.99, Now £20.00
Promises of power and domination have lured the primitive Troglodytes to the Darkness. Their knowledge of extended cave systems has proven invaluable to host their new allies, and their bloodseeker minotaurs are living assault machines. The strong and tough Troglodytes have sworn allegiance to evil and will crush anyone who opposes them!

This Enemy Box contains two additional Mobs (Boss and Minions) an Agent, and a Roaming Monster, along with their game cards for Massive Darkness. Brutal and revelling in the darkness, Troglodytes are shock troops for the Darkness' army. They forged pacts with Bloodseeker Minotaurs, mighty monsters who relentlessly charge at the heroes.

These miniatures may also be used in any fantasy or roleplaying game.

Massive Darkness is a dungeon-crawling board game for 1-6 players. With no game master and streamlined rules, players take their heroes on a series of quests to defeat the forces of Darkness.

A MASSIVE DARKNESS CORE GAME IS NEEDED TO PLAY WITH THIS EXPANSION.