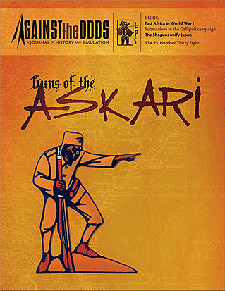 Against the Odds: Guns of the Askari

Truly the Forgotten Campaign of World War I
From the opening guns, Paul von Lettow-Vorbeck's plan for the war was quite simple. Knowing that East africa would only be a sideshow, and knowing escape and reinforcements were both impossible, he determined to tie down as many British troops as he could.

He succeeded beyond anyone's wildest imagination.
Depending primarily on his "Askari", well-trained and highly-motivated African soldiers, who were better able to endure the climate and diseases, he conducted what some have called the greates geurilla campaign of all time, filled with historical events which sound too unlikely to be used for movies.

Heavily outnumbered from the opening days of the War, the Swahili-speaking German commander only surrendered after being informed of the Armistice on the Western Front.

Few "Against the Odds" situations lasted as long or ended as successfully as the East African Campaign. And now you can see the whole operation from the inside out.

Designed by WWI game specialist John Gorkowski, Guns of the Askari features 280 half-inch full color counters that represent forces as varied as rifle companies, armored cars, naval units for oceans or lakes, and the supply units on which both sides depended. There are even artillery units back-printed with the other side’s colors, so that they can be captured and used again.

The game offers four different scenarios, from the complete campaign to the 1918 guerrilla operation and two periods in between. Combat mechanics change as the nature of the conflict evolves, and each turn has a variable end point.