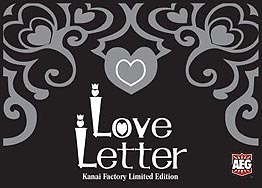 Once upon a time, there was a kingdom in which lived a beautiful princess. She was a sweet soul, kind to all and was thus loved by the whole of the kingdom. Several young men had fallen helplessly in love with the princess, but unable to enter the castle, all they could do was send her letters of their affection. However, to their dismay, they found that letters from just anyone would not reach the princess. So the young would-be suitors set themselves on finding allies among the castle’s servants, so that they might deliver their letter to the princess personally.

Love Letter has become a worldwide hit with its simple yet deep gameplay. With only 16 cards, it contains hours of fun for everyone as you attempt to win the heart of the beautiful princess, while preventing your challengers from doing the same!