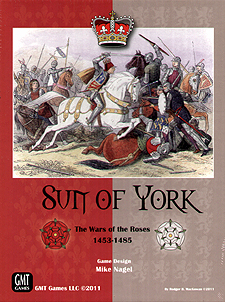 "Now is the winter of our discontent
Made glorious summer by this
...Sun of York"
- Richard III (Act 1, Scene1) by William Shakespeare

The Wars of the Roses (1453-1485) were the result of the struggle for the English crown between the Houses of Lancaster and York. Both were descended from the Plantagenet line and both had equal claim to the throne. The red rose being the emblem of the House of Lancaster, the white the House of York. By the end of this bloody struggle, both houses would be extinct and the crown grasped by the first of the Tudors.

Sun of York is a card game depicting the tactical battles fought between these two royal houses.

Represented by the cards are major leaders, including King Henry VI (too weak a leader to maintain control of the kingdom), Margaret of Anjou (Henry's strong-willed and manipulative queen), King Edward IV (organizational genius and longest holder of the crown), King Richard III (with a ruthless ambition) and Richard Neville, Earl of Warwick (the "King Maker"). A large variety of troop cards include Levies, Longbowmen, Knights, Cavalry and units battle-hardened from conflict on the Continent. Terrain cards define the battle area for each scenario and Special event cards provide plenty of historical flavour.

Unlike many wargames, Sun of York does not use a map. Instead, battles are fought out on a tabletop by moving units through ranks to fire at or engage the enemy in melee. Morale plays a key role as units muster the courage to crash into the enemy's shields or be hurled back themselves. Leaders bolster this morale as well as guide units through the battle and on to victory!

Every major engagement (and a few minor ones) is included in Sun of York, for a total of twenty scenarios in all. Rules for randomly generated scenarios are also included as is a campaign system allowing players to fight out the Wars to their bloody conclusion.