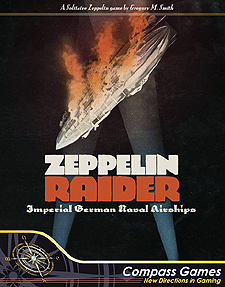 Zeppelin Raider: Imperial German Naval Airships is a solitaire, tactical level game placing you in command of one of several models of WWI Zeppelin dirigibles as part of the Imperial German Navy. Your mission is to maximise the destruction of English war facilities via bombing raids, or to conduct reconnaissance over the North Sea...and still survive and come home.

"England shall be destroyed by fire!"
line from a popular German children's song, circa WW1.

So hoped Germany after the initial successes of World War 1 turn into a quagmire and stalemate in the trenches...but now, a new weapon arose, capable of crossing the channel with impunity and wreaking destruction on England. One hundred and seventy seven Zeppelin sorties would pummel England during the war, with high explosive and incendiary bombs. The Zeppelins finally lost the arms race to aircraft and explosive/incendiary bullets, however, and losses were grievous. Over half of the German Navy's airships were lost. It was not a job for the faint of heart.

Players will try to survive an entire tour from 1914 to 1918, at which time, you will surrender at base, having done your part on the front lines. The object of the game is to conduct numerous missions with success resulting in promotion and crew advancement. Just as in the real war, although some luck is involved, ultimate success rests on the decisions you make. Rules cover mission selection, altitude adjustment and gas cell tracking, venting, emergency jettison, maximum altitude, dynamic lift, wind and weather effects, fuel management, bombing missions, aircraft and ship encounters, zeppelin damage, crew advancement, awards and promotion, and much more!

Zeppelin Raiders delivers a tense and nail-biting narrative throughout the course of play. While designed as a solitaire game, additional options for play are provided for both multi-player gaming sessions and organized tournament play.