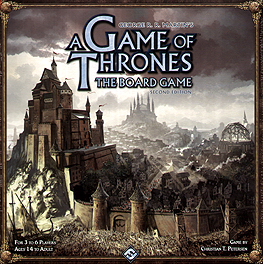 A Game of Thrones The Board Game 2nd Edition

Claim the Iron Throne and the lands of Westeros!

King Robert Baratheon is dead, and the kingdoms of Westeros brace for impending war. House Lannister, whose daughter Cersei was Robert's queen, claims the throne for her young son Joffrey. From his seat on the isle Dragonstone, Robert's younger brother Stannis rightfully demands the throne for himself. On the Iron Isles, House Greyjoy is about to embark on a second rebellion, but this time with a grander goal. In the north, House Stark gathers its strength to defend what is right. In the south wealthy House Tyrell harbours an old ambition to sit on the Iron Throne but must be ever wary of the ancient House Martell and its legacy of vengeance. All the while, in the far north beyond the Wall, the wilding threat steadily grows in strength.

As armies gather and ravens fly, a clash of kings is inevitable.

Based on the best-selling novel series A Song Of Ice and Fire by George R.R. Martin, A Game of Thrones: The Board Game allows players to take control of the great Houses of Westeros and embark on an epic struggle to claim control of the Iron Throne. Immerse yourself in a game of clever planning, careful allocation of power, and delicate diplomacy, and the exciting flavour of A Song of Ice and Fire.

This updated 2nd Edition of the best-selling board game brings a host of enhancements to your A Game of Thrones experience. It incorporates elements from the previous expansions, including ports, garrisons, wildling cards, and siege engines. In addition, it introduces welcome new innovations; convenient players screens hide your careful planning from prying eyes, while the new Tides of Battle cards convey the risks of war.