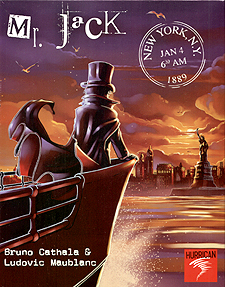 As part of the investigation into the "Jack the Ripper" affair, Francis J. Tumblety, a quack doctor, is arrested and freed on bail. He immediately flees to the United States. New York - Manhattan - January 1889 Alerted by London, the New York police are on the lookout for Tumblety. Certain witnesses confirm his presence in Manhattan and crimes are committed with a modus operandi similar to those in London. The police call upon some of the city's most eminent citizens to help them with their investigation. Is Tumblety really Jack? If not, who is he pretending to be? These are the stakes in "Mr Jack in New York". A thrilling game for two players! Mr Jack in New York is a complete game. You do not need to own or have played the other titles in order to play. Nevertheless, because of the increased tactical possibilities in the New York version, we recommend that players who are new to the world of board games should start with the basic "Mr Jack" game. Review Game There is no review for this game at the moment why not be the first to review it.