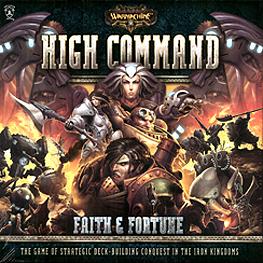 THE GAME OF STRATEGIC DECK-BUILDING CONQUEST IN THE IRON KINGDOMS

As the fires of war engulf western Immoren, the call for great leaders has never been stronger. The Retribution of Scyrah and the Convergence of Cyriss muster their forces to wage war on a new scale. Mercenary armies of the Highborn Covenant and Four Star Syndicate sell their services to the highest bidder, while also pursuing their own larger agendas. Take command of these four new factions in their battle for dominion over the Iron Kingdoms! Will you lead your faction to victory, or be crushed by the military might of your rivals?

The WARMACHINE High Command Faith & Fortune core set introduces four new factions: Retribution of Scyrah, Convergence of Cyriss, Highborn Covenant, and Four Star Syndicate. This core set is a stand-alone deck-building card game. It has everything 2–4 players need to play and can be customized with expansion releases for the included factions. Leverage your resources, rally your armies, and dominate your foes to set your banner above all of western Immoren!