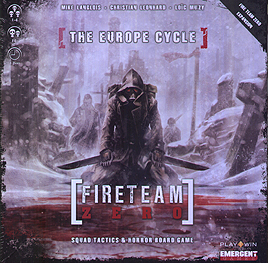 Face the Bloodless in the Old Country! As winter grips the Eastern Front, fallen soldiers from all nations are used to give rise to a new army. One driven by a single will towards an unspeakable purpose.

Fight for the survival of mankind across the frozen battlegrounds of Eastern Europe in this expansion for Fireteam Zero.

SPECIALIST DECKS!
Enhance your Specialists with all new powers! A deck of new cards is included for each specialist type (Lore or Psychic), allowing your team to access fantastic new abilities in combat. Wield these powers carefully, as they can only be used a limited number of times. In addition, each time they are invoked, they raise the stakes by pushing the mission Threat higher.

HERO UPGRADES!
Comes with two 4-card upgrades and an all new Focus for each hero!

NEW MISSIONS!
AN ALL-NEW 3 ACT OPERATION against the Bloodless: Blacktooth. This operation features Act I: Bloom, Act II: Castles of Rot, and ActIII: Lord of the Manor, House on the Hill.

BLOOD SACRIFICE - Moxy sends word that something is stirring in an abandoned sanatarium near Prague. Judging by the human and inhuman corpses surrounding the building, the last remaining inmate has been busy. But doing what?

THE HUNT - An intercepted ULTRA communication from the German High Command send you into a confrontation with three renegade Wunderwaffe officers, each determined to sacrifice their humanity for unlimited power.

ARTEFACT VAULT BRAVO - Artefact Vault Bravo has been classified CODE ZERO. Despite adherence to the Malicious Objects protocol, new inventory has begun to awaken the Vault's contents. You have one hour to secure the vault. Or else.

Expansion for Fireteam Zero, the core set is require to play.