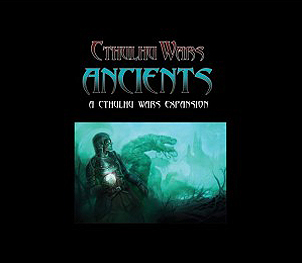 The Ancients rise from the deep caverns in the earth below! Uniquely, they worship no Great Old One, but instead buikld their mighty Cathedrals of hell.
The Ancients owe fealty to no Great Old One. HArsh atheist realists, their underground empire has emerged to seek its place on the surface world. While human genetically, their psychological and technological knowledge give them the might needed to compete with the other horrors infesting Cthulhu Wars.
Their Cathedrals spread across the planet and give them foci from which to rule supreme, while their weird monsters each all have drawbacks but are cheap and cheerful to summon. More than any other faction, they can use their diplomacy to influence other factions' decision making. Their Un-Men are degenerate plasma entities - they can be summoned for free, but provide a chosen enemy with power. Their loathesome Reanimated are atomic zombies with no will of their own, and their fearsome Yothans are colossal prehistoric reptiles which are actually Terrors instead of Monsters, but face imminent extinction.

If this is your only expansion you can use it to bump up your Cthulhu Wars game to incorporate five players! Or just play the normal two to four player game, only with the Ancients as one of your faction options. The Ancients can be used with any other expansions in any combination.

YOU NEED THE CTHULHU WARS CORE GAME TO USE THIS PRODUCT.