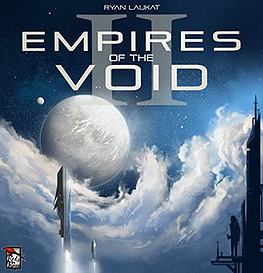 Empires of the Void II

Your species has travelled for years in a massive Worldship, fleeing from a cruel and unstoppable alien empire. Now, in the distant fringe of the galaxy, you must compete to establish a foothold, and grow in strength, preparing for the time when the invaders find you again...

Empires of the Void II tells a story about eight fringe planets and the species that live on them, through unique event and action cards. You'll find ancient ruins, stop planetary wars, transport desperate leaders to distant locales, and rescue worlds from imminent invasion. Will you choose to conquer or befriend the aliens you encounter? Your alien allies will give you powerful abilities, and unique characters you can recruit.