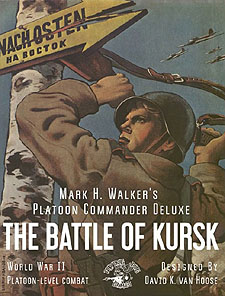 The Battle of Kursk is a Platoon Commander Deluxe module simulating Unternedhmen Zitadelle (Operation Citadel) July 5, 1943 through July 16, 1943 the German offensive period against the Soviet Union. The module designer, David K. van Hoose; has brought to life the largest armour engagements of World War II that would not be recast until 1965 during India-Pakistan War. The module includes twelve scenarios that will take the gamer from small skirmishes to the slugfests near Prokhorovka. Fight with tiger tanks, Panther tanks, Pz-IV tanks, T-34/76 tanks, KV-1 tanks, SU-152 assault guns, infantry (rifle, guards, pioneers, submachineguns), mortar batteries, Stukas, IL-2, and more. Lay Mine Fields, Dig In, Place Barbed Wire, call devastating Air and Artillery support. The historially accurate forces are at your command. Can you lead them to victory?

Platoon Commander Deluxe is a Mark H. Walker designed, platoon-level game system depicting armoured combat from 1936 into the near future. The counters represent everything from tanks and infantry to armoured personnel carriers and, as the technology progresses, even missile teams. The game uses an innovative sequence of play; a card-assisted system that is partially impulse driven, partially turn-based, and all fun. Morale plays a decisive role, and the period's equipment is understandably depicted with colours and numbers on each counter. From the designer of Lock 'n Load, World at War, and Night of Man, '65 Squad-Level Combat in Vietnam, Platoon Commander Deluxe is an exciting accessible game of strategy and tactics.