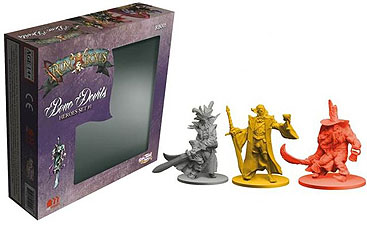 Was £16.99, Now £8 50
Captain Dracula
The great vampire of legend has led many, many lives through the long millennia, and at many times he's been a sailor. A longtime associate of Captain Albrecht's, he was intrigued to learn the troubles in the Locker and the appearance of Davy Jones' Treasure in the living world. Since then he has taken up service with the Bone Devils, and often commands his own ship and crew. With persistence and a little luck, he'll pillage enough coin to finally build that mountain retreat he's always wanted. Maybe he'll even settle down; drain a few wives. Who knows?

Daedalus the Soul Herald - Quartermaster
Daedalus was once a disciple of the Ferryman himself, and would light the way to the river Styx for lost souls trapped in Limbo. But the Ferryman is a stingy boss, and Captain Albrecht offers far better pay. His lantern still calls to the dead, and the Bone Devils heed just as well as lost Souls. This makes him a natural as Quartermaster. There is one aggravation that the living land have, however: moths. Every-bloody-where. It's a small price to pay though, to sail the seas eternally in search of glory and coin.

Renfield the Bloodcrazed - Swashbuckler
A longtime disciple of Captain Dracula's, Renfield is quite incurably insane. He's a loyal servant and retainer, however, so Captain Dracula indulges his flights of fancy and lunatic ravings. Most recently, Renfield has decided he's a vampire. He's been practicing his brooding, drinking blood, and has developed splendid pallor by avoiding the sun at all costs. Strangest part is: it seems to be working. Still, in battle his ordinary giggling, obsequious self can be seen, as he routinely begs his master for permission to run amok, slicing and maiming anyone unlucky enough to cross his path.

Rum & Bones is a board game of cutthroat swashbuckling pirate battles for 2 to 6 players, 14 years of age and up. This set is part of the Wellsport Brotherhood faction. A copy of Rum & Bones is required to play.