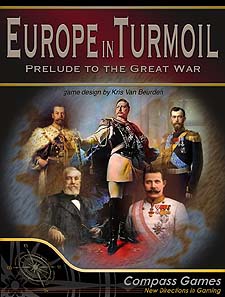 Europe in Turmoil: Prelude to the Great War

it is the end of the nineteenth century. The Nation-states of Europe are prosperous and powerful as never before. Warfare in Europe is considered to have become obsolete. There is nothing to predict that in two decades, millions will be dead and the scene will be set for an even larger struggle. However, dark clouds gather, as Kaiser Wilhelm II ascends to the Throne of Imperial Germany, eager to make his mark on the world.

In EUROPE IN TURMOIL, players assume the role of a political ideology ascendant in Europe at that time, with one side playing the Liberal (representing not just Liberal, but also Socialist principles) and the other side playing the Authoritarian (representing the repressive, autocratic regimes of Germany, Russia, and Austria-Hungary).

EUROPE IN TURMOIL is a card-driven game simulating the political and socio-economical events in Europe at the beginning of the Twentieth Century leading up the First World War. Players will alternate playing event cards trying to influence the various nations of Europe, represented on the game board as conglomerates of both geological and political entities. Events refer to the various alliances binding nations to either Entente or Central Powers, to the growing instability in Tsarist Russia, to the Naval Arms Race which represents the Dreadnought build-up between Germany and Britain, or to one of the many sundry historical crises which, each on their own, might have started a World War.

Will the strongly Authoritarian Empires of Central Europe hold out against rising Liberlism? Will the Workers combine forces with the land-hungry Farmers and marginalised Intelligentsia to oust the ruling Bourgeois, Nobility, and Monarchy? Will "The Great War" break out, shattering the Status Quo? These, and other exciting possibilities will soon be open to players.