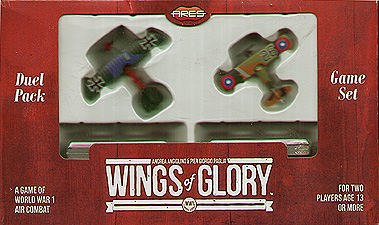 Year 1917. All across Europe, while a last-ditch battle is fought in the mud of the trenches, colourful airplanes fly in the skies, piloted by men of exceptional skill and valour.

Take the commands of one of these early flying machines, and gallantly fight your opponents as a true "Knight of the air". Complete missions and become an ace, following in the steps of famous aces like Manfred von Richthofen or Frank Luke Jr.

Wings of Glory is a fast-playing and easy to learn game system, that allows players to recreate aerial combat during World War 1.

Cards and miniatures are used to represent the airplanes and their manoeuvres.

This Duel Pack is the ideal starting point to play Wings of Glory. It includes everything your need to start playing: rulebook, cards, counters, measuring rulers, and two airplanes, in 1/144 scale, fully assembled and painted. Each airplane comes with its special gaming base and manoeuvre deck.