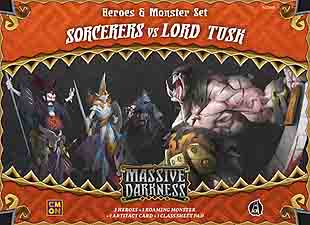 Was £23.99, Now £15.00
Lord Scarguts Tusk is among the world's most infamous ogres. Gleeful to heedlessly wade into combat alongside his brothers and sisters to make pulp of his foes, he hides his true endgame within his frenzied cunning. Once victory is theirs, the Darkness will need capable and loyal rules for the world!

This Heroes & Monster box contains a Roaming Monster, three Heroes, and Artefact, and a new Hero Class for Massive Darkness. Lord Tusk is a juggernaut of a monster, with huge blades that can strike several foes with amazing reach. The Sorcerer Class is a Magic attack specialist, standing in the darkness to blast their enemies. All three Hero miniatures may be used as additional or alternative characters for your game.

These miniatures may also be used in any fantasy or roleplaying game.

Massive Darkness is a dungeon-crawling board game for 1-6 players. With no game master and streamlined rules, players take their heroes on a series of quests to defeat the forces of Darkness.

A MASSIVE DARKNESS CORE GAME IS NEEDED TO PLAY WITH THIS EXPANSION.