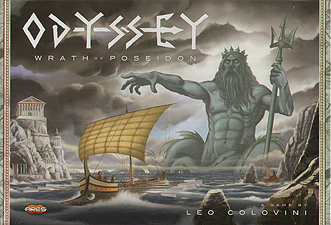 Was £33.99, Now £25.00
The Trojan War is over, and the Greek ships are tying to sail back to their homeland after a long absence. To do so, they must beg forgiveness of the wrathful sea god, Poseidon, who sided with Troy during the war. They need to reach the Sacred Island to make offerings and prayers to the gods... but the irascible Poseidon will use all his powers to prevent them from getting there!

As one of up to four Navigator players, command the Greek ships, sail through endless storms and dangerous sea monsters, blind to all around you, trying to gather clues to your whereabouts to stay on course. As Poseidon, set obstacles on the course of the navigators and throw powerful storms against their ships, driving them off-course and confounding them, so they cannot reach the Sacred Island in time.

Odyssey: Wrath of Poseidon uses two boards, hidden from each other. The Poseidon player uses his Storms to secretly move one or all the ships on his game board, which shows the real position of the ships, then give information to the Navigators about what they see around them.

The Navigator players have to guess where they are, using the information they get from Poseidon, to trace their course to the Sacred Island.

Multiple game boards enhance re-playability; and multiple variants - including Sea Monsters, Maelstroms, Lighthouses, and more - are included to make the game easier or harder, according to the players' preferences.