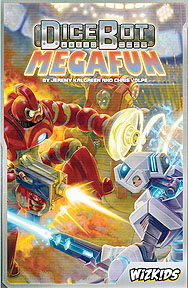 In the future, robots fight for the glory of their human owners. (Oddly enough, the robots do not seem to mind.)

In DiceBot MegaFun, you'll equip your bot with the parts to power lasers, bombs, drills, and more, as you do battle in rounds of simultaneous free-for-all-combat.

The speed of both the bot AND the player is key. Each round begins with a mad scramble to scavenge the best parts from the junkyard to power up your secret weapons.

Weapons with higher speed values power up faster, giving your bot the edge in the beat-down to come. But choose wisely...if you run short of parts, even the most powerful weapon will fizzle!