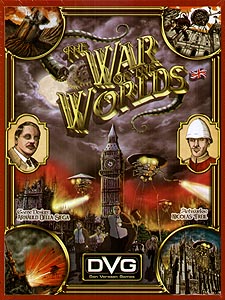 War of the Worlds: England

Very slowly, the circular top of the cylinder was rotating on its body...

The War of the Worlds is directly based on the famous novel by HG Wells.

The War of the Worlds is a solitaire game. You take on the role of Commanding England's military forces in a desperate attempt to defeat the invading Martian Tripods, while the game system controls the Martian forces!

The War of the Worlds is played on a Strategic Map of England. When Martian Tripods and Human military forces enter the same Zone, you resolve the battle on a Tactical Map. Deploy your Guns, Infantry, and Cavalry to hold back the Tripods before they devastate all of England!

Unique to England is the 95t Gun and the HMS Thunder Child! These are super-powered versions of the Siege Gun and Warship.