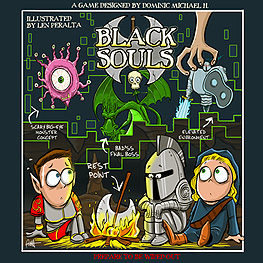 Designer Inc's latest video game title Black Souls has achieved international success! Hailed as one of the toughest digital games ever, it has attracted millions of hardcore gamers. The secret behind this huge success lies not in just making an extremely difficult game. Anyone can do that. The true challenge lies in balancing it to be as tough as possible, but still fair enough that the best players can still manage to beat the game. Alas the game studio is heavily short staffed and the management is looking to hire another Game Designer for developing more content in Black Souls.

You have you been given a once-in-a-lifetime opportunity to be hired by Designer Inc as a level designer, an integral part of Black Souls' development team! As one of the finalist candidates, you must prove your designing skills under the judging eyes of your future employers in an 'Early Beta Access' trial to create a level that best reflects the spirit of Black Souls - a very difficult, yet fair game. A group of playtesters will be sent to try your carefully designed level, and feedback on whether they like it. If the level is too easy, they would not feel challenged at all. If it is too hard, they would all be killed and find it unfair.

Who will be the final candidate to be inducted into the ranks of the game studio?