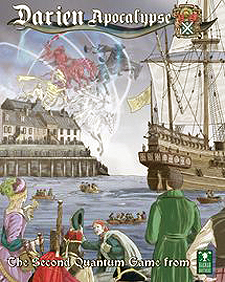 Darien - stand against the Apocalypse!

In 1698 the finest hopes of Scotland set sail for the Isthmus of Panama, seeking opportunity to stand equal with the great trading nations of Europe.
Alas, the fate of this new Caladonia would be beset by famine, pestilence, war and death and in less than two years this brave attempt to carve out a new frontier ended in disaster. The Four Horsemen of the Apocalypse turned their eyes to Darien and found it an affront to the order of nature.
Mortal sinews and stamina were not sufficient to overcome the visitation of inhuman wrath and soon only the remnants of this outpost were derelict huts and overgrown graves.

Can you stand better against infernal forces?
Can you build a thriving community that defies the Four Horsemen?

In this game you will take the role of a leader of the ill-fated Darien expedition.
You will attempt to survive all that the Horsemen can send against you
The fate of two thousand settlers rests in your hands!

This is Ragnar Brothers' second Quantum game. In Darien Apocalypse there are four parallel worlds; some may triumph and some may fail.

The game is designed solo to 4-players and can be played equally well as a co-operative or competitive game. Game length is 2 hours.