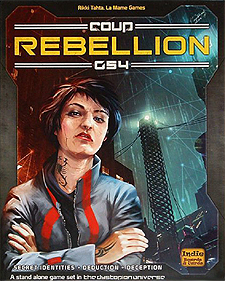 A stand alone game set in the dystopian universe.

In the not too distant future, you are a leading person of interest with connections to both the established government and underground rebellion. This popular uprising has brought the government to its knees and now the country is in chaos with different factions competing for power in the newly formed "democracy". In this environment anyone can become president if they can find the support and eliminate their rivals.

Coup Rebellion G54 is the exciting sequel to Rikki Tahta's award winning game, Coup. G54 uses the same lightning fast rules found in Coup - claim, couinter, challenge, and bluff - and then adds an exciting strategic layer via character selection. Before each game starts, five character roles are chosen randomly from 25 different cards. Each of the five characters has a unique ability - the combination of abilities and interplay between them makes each game unique.

There are over 5,000 different ways to play!