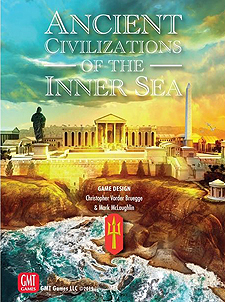 Ancient Civilizations of the Inner Sea

Conquer the World: Carve out an Empire - or Build an Enduring Civilisation to stand against the Barbarian Darkness

is an exciting, fun, easy-to-learn, easy-to-play but challenging-to-master abstract game in which players guide the renowned and legendary Civilizations that surged and receded around the shores of the Mediterranean, which the Romans aptly called the Mare Internum, or Inner Sea.

Peace or War - or a bit of both?
Compete peacefully to build the best, biggest and brightest Civilisation - or go to WAR to become the dominant power of the ancient world (or do a bit of both). There are many ways to play and win

Ancient Civilizations of the Inner Sea. Not every game has to be a war game - but for those who want a wargame,

Complete Solitaire and Non-Player Civilisation Rules for EVERY Set-up and Scenario.

- Play as one of ten great Civilisations across up to four Epochs, with more than two-dozen set-ups to choose from - or design your own ancient "sandbox" in which to play and confront the conundrums this intriguing game provides.

An Epoch comprises up to four Player Turns. There can be up to four Epochs in a game of

Ancient Civilizations of the Inner Sea. Each Epoch roughly adheres to the following historical periods:

- Or explore an entirely new and different world every time with the Exploration variant.

- Fight to defend - or destroy - Egypt, Persia, Greece, Carthage, or Rome in one of seven historical wargames.

Play SOLITAIRE or with up to five other players, any of whose Civilisations in ANY set-up, scenario, or variant can be controlled by a unique, challenging and thoughtful Non-Player Civilisation system specifically designed to provide hours of thought provoking gaming enjoyment.