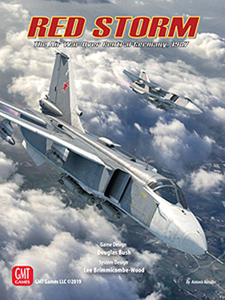 Red Storm is a standalone game using the proven Downtown game system to simulate the air battles of a hypothetical war between the Warsaw Pact (WP) and North Atlantic Treaty Organisation (NATO) over Germany in 1987. The game's 36 scenarios, including four solo scenarios using a new solo "bot" and two campaign scenarios that link multiple raids together over a period of days, depict a wide range of air combat situations.

Like Downtown and Elusive Victory before it, Red Storm simulates these air combat scenarios in detail, but at an "operational" scale where players see the "big picture" with an emphasis on mission planning in a complex threat environment. Players are tasked with organising ground defences using many different weapons as well as integrating numerous aircraft flights with different roles, such as bombing, suppression of enemy air defences, electronic jamming, and air superiority. In line with the initial games in the series, the rules, thoroughly revised for the modern air battle space, reflect the human side of the conflict with a focus on the morale of the real people that would have flown the aircraft, and fought on the ground.

The Warsaw Pact player uses forces from both the Soviet Union, and East Germany, including 37 different aircraft models, and nine types of SAMs. The core of Warsaw Pact air flets are MiG-21 and MiG-23 multirole fighters, but they are backed by a wide range of dedicated tactical bombers such as the MiG-27, Su-24, and Su-25, along with dedicated recon aircraft like the MiG-25 and strategic bombers including the Tu-16 and Tu-22. Early models of sophisticated MiG-29 and Su-27 fighters, cruise missiles, and Mi-8 helicopters are also available.

The NATO player fights with the forces of the United States, United Kingdom, West Germany, the Netherlands, Belgium, and Canada, featuring 42 different aircraft types. Aircraft run the gamut from multirole workhorses like the F-4 and F-16, to specialised ground-attack aircraft such as the A-10, Alpha-Jet, and Jaguar. The stealthy F-117, pure superiority fighters like the F-15, and deep attack F-111 and Tornado aircraft also appear.NATo ground forces bring to the battle seven types of SAMs and various radar-guided AAA systems.

The skies in the late 1980s over Germany are deadly, but with good planning, brave crews, and a little luck, victory is possible. Are you up to the challenge?