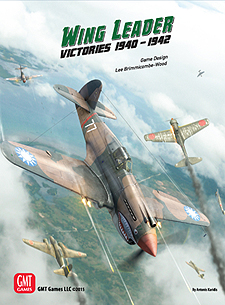 In the early 1940s, great air fleets clash in the skies above Asia, Europe, North Africa, and across the Pacific Ocean. Formations of raiding bombers meet sleek interceptors, guided from the ground by radar. Escorts jockey for altitude, then grapple with enemy fighters in fierce engagements. Shot-up pilots bail out of their aircraft, while their squadrons are scattered to the winds. Bombers fight their way through to drop bombs on vulnerable targets below.
Wing Leader: Victories is the first volume in the Wing Leader game series. It is a game of massed air battles where players command squadron and flight-sized units in formations of wing strength or greater. One side takes the role of raiders, leading a force of bombers through to the target. The other side defends with fighters, trying to claw for altitude and intercept the enemy.

The game employs a side-view of the air battle, in which the forces manoeuvre vertically and end-to-end along the path of the raid. Players must gain height, exploit the Sun and cloud for advantage, and mass or divide their formations to stop the enemy. If you fail, the enemy bombers will rain down bombs on men and ships below. You are the Wing Leader.

Wing Leader: Victories features 40 aircraft of the major combatants of the early war: Germany, Great Britain, Italy, Japan, the Soviet Union, and the United States. There are fighters, bombers, dive bombers, and torpedo bombers. Twenty-three exciting scenarios range from the Battle of Britain, to Malta, North Africa, China, the Coral Sea, Midway, and Stalingrad.
The rules cover air combat, situational awareness, command and control, and aerial bombing. They detail aircrew quality, doctrine, Experte pilots, and special weapons, such as rockets, gun pods, and torpedoes.
With small, introductory scenarios to ease players into the action, Wing Leader takes you into the heart of the great air battles of the Second World War.