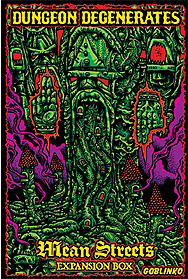 While the Hand of Doom menaces the countryside, a new terror looms on the horizon! Spreading through the vermin-infested cellars, back-alleys & sewage canals of the Imperial sprawl, the plague threatens to run rampant through the Wurstreich & the scattered renegade settlements of the Borderlands.

Unleashed on the civilized world through numerous vectors lurking in the refuse & rot of the Empire's city squalor, the plague is secretly fed by cultists & foul monsters conjured forth by witches & wizards obedient to the will of the dread Necromancer.

With the death-toll mounting, the plaguefinders scramble frantically to contain the spread of contagion. The scholarly elite develop elaborate & expensive cures & the Houses of the Wurstreich bargain & quarrel over the rights to sell medicine. While the servants of the Empire squabble & bicker, the flies gather in vast black & buzzing clouds to feed on the dead & dying in the gutters of the mean streets!