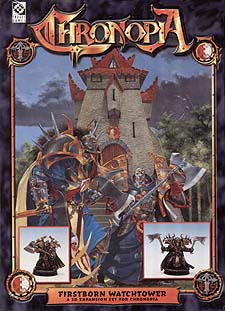 The Firstborn Watchtower is a 3d expansion set, that takes the concept of fighting in and around buildings to a new level, offering a wealth of new opportunities for future battles in Chronopia. It begins with the Firstborn Watchtower but where will it end - in the ringholds of the dwarves or the tombs beneath a Stygian Ziggurat? This product will allow you to take your battles to new heights and hidden depths.

Contents:
* A full colour card model of a Firstborn Watchtower: on eight A4 sheets for you to construct.
* Two exclusive new miniatures; only available with this boxed set: The 'Enlightened' of the Firstborn and the 'Stalker' from the ranks of the Devout.
* A 32 page booklet containing comprehensive new rules for using buildings on the battlefield and for fighting indoors or underground. A scenario designed around the Firstborn Watchtower with descriptive text and battle photographs to put the tower and the new rules in context.
* New templates and counters to help you fight in and around buildings. This is not a stand-alone product; a copy of the main Chronopia rules is required to use the additional rules included in this box set. Review Game There is no review for this game at the moment why not be the first to review it (you never know you might win a prize)?