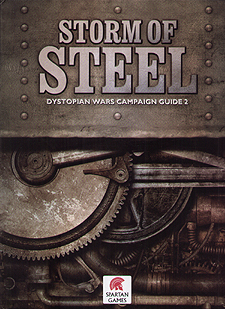 BY LAND, SEA AND SKY... THE STORM BEGINS

Invasion and retaliation shake the great powers and their allies as the devastating World War explodes across Northern Europe in a deadly clash of arms!

Kingdom of Britannia forces launch a major offensive across Belgium, looking to avenge the London Raid of 1870; a powerful Russian Coalition expeditionary force sets sail for the British Isles, the Tsar determined to open a new front in his war against the Prussian Empire. meanwhile the Republique of France is pouring forces into the Low Countries to aid its Belgian and Prussian allies and, in a staggeringly aggressive move, President Bonaparte has authorised nothing less than an assault on the shores of Britannia itself.

Storm of Steel is the second exciting Campaign Guide for DYSTOPIAN WARS and within its pages we massively develop the history of the world, play out military campaigns, expand on the great commanders of the period, offer exciting scenarios, statistics for the machines of war from four new Alliance Nations, provide exciting new game rules to enhance the current core rule set and deliver an entire set of Infantry ground combat rules.

A must for all military commanders...