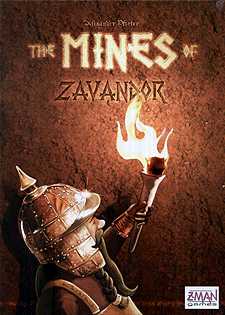 Was £39.99, Now £25.00
Grimmborn, King of the Dwarves of Zavandor, sighed. His time of office was drawing to a close, and he had only one task remaining: to arrange for his succession. As tradition required, he could hold a pre-selection among the contenders and declare two to four of them as capable to participate in the procession through the mines. He still had fond memories of his "own" procession, when he followed the King's Path with Grumdig, Hilfar and Weldag, leaving them far behind him. They had been good years, this time of his reign and he had used them to amass gemtstones in his treasury. Now he could retire in peace and leave the hard work of governing to a younger man...

In "The Mines of Zavandor", players take the role of a candidate for the King's Throne (because dwarves live for far too long, inheritance by primogeniture was removed years ago and replaced with a 3-year reign).

They must follow the "Path to Kingship" which winds through the depths of the mountain to reach the Coronation Chamber, where the game ends. The player with the most Victory points at that time wins the game. Each round, players receive a supply of gems from the four different mines. They can use these to bid for profitable improvements to their mine gallery - or to upgrade the improvements they have already acquired. Contents: Review Game There is no review for this game at the moment why not be the first to review it.