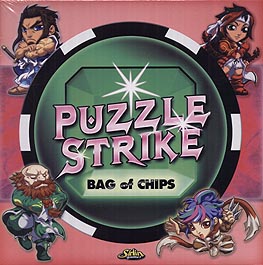 Puzzle Strike is a card game played with chips instead of cards that simulates a puzzle game. Break gems from your gem pile and send them to your opponents' gem piles while customizing your deck to do bigger and bigger combos!

You build your deck as your play. You get the fun of combos from collectable card game, but with nothing to collect: This is a complete game is a box. Shuffling cards a lot sucks, so you play this entire game with chips instead. Shake them up in a bag (included), and you can shuffle in two seconds. 10 characters to choose from, each with different gameplay. There are over 411 MILLION starting conditions for this game, so it's new every time. A built-in comeback mechanism means even when you're about to lose, you're poised to do even more combos. Balanced for tournament play by balance veteran David Sirlin, yet easy for beginners to pick up and fun even if you're terrible at first. Contents:
Review Game There is no review for this game at the moment why not be the first to review it.