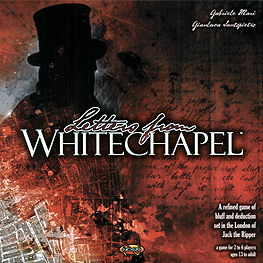 Jack the Ripper hides in the darkest streets of London.
Will you be able to stop him.

Letters from Whitechapel is a crime and investigation game by the designers of Garibaldi and Mister X: Flight Through Europe, inspired by Jack the Ripper's murders and Scotland Yard's desperate attempts to stop them. Each night, the player who controls Jack commits a new murder and tries to reach his hideout. The other players, in the role of detectives, try to track him down, collecting clues that can lead to his capture. Letters from Whitechapel is a tense, historically accurate game for 2 to 6 players, featuring intense and graphic design. Review Game