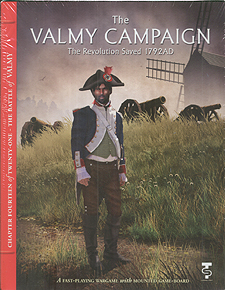 We realise "Valmy" does not ring bells like Austerlitz, or Waterloo. Yet, of all the Twenty Decisive Battles of the World, Valmy may most deserve the title; not so much for what happened, but for what did not happen. Valmy could have marked the end of the French Revolution.

The Valmy Campaign is one of the turning points of history... the end of the old quaint style of warfare under Kings and the beginning of the mass levies begun in the French Republic. It pitted the unproven revolutionary armies against the troops of Prussia, still living with the reputation gained under Frederick the Great, and aided by a coalition of Austrians, Hessians, and French Royalists... an army headed for Paris to put down the revolt once and for all.

After the battle, the defeated Prussians retreated all the way back across the Rhine.