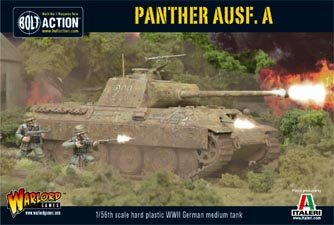 The discovery by the Germans that the Soviets had a highly effective medium and heavy tanks spurred on their designers to produce a well balanced medium tank that had excellent armour, fast speed and a hard hitting gun.
The result was the formidable Panther.

Despite its heavy sloping frontal armour, impenetrable to many allied guns, it could still reach speeds of over 30MPH. Its main advantage however was to be found in its superb long 75mm gun, arguably even more deadly than the feared 88mm. This gun could knock out all but the heaviest allied tanks, even at extreme ranges.

The Panther was produced from 1942, and alongside the older MkIV, was the standard main battle tank of the late war panzer forces, proving to be a ferocious opponent on the battlefield.