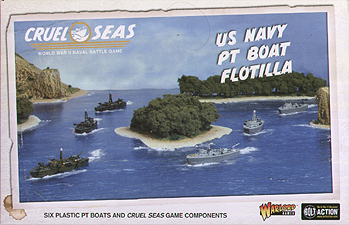 The powerful US PT (Patrol Torpedo) boats epitomise American know-how and firepower. The boats built by the Higgins and Elco companies first saw service helping to fight off the surprise Japanese attack at Pearl Harbour, where they shot down enemy aircraft with their four, large calibre Browning machine guns.

Their principle weapon was four torpedoes, used against any large target, whether Japanese, German, or Italian. The Americans traditionally love their guns, and soon, the crews were officially (and unofficially) adding weaponry to make their agile boats more effective. They scrounged and fitted 37mm guns and extra 20mm automatic guns were also placed around the deck. Later marks had the brutally efficient 40mm Bofors on the rear deck.

Really enterprising crews added an infantry mortar to the mix, and some were equipped with frightening, if inaccurate, rocket packs. A very late war development was the Thunderbolt - a power operated quadruple 20mm gun system.

These boats were principally built of wood, and were fast and manoeuvrable as a result. They served in the European theatre, the English Channel and North Sea, the Mediterranean, and in numbers in the Pacific, generally hunting down small, Japanese coasters and sampans.